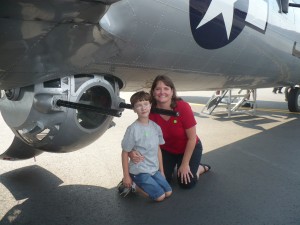 April is Women in Aviation Month, so we thought we’d profile one of our favorite women in aviation.

Like many good moms, she indulged their interest by spending time in a playground and restaurant near the airport in Atlanta where the boys could get their fill of watching airplanes come and go.

Like many good moms, she’s also concerned about the lack of opportunities for her boys to get “up close and personal” with airplanes, airports, tugs, mechanics and the other fascinating stuff that happens around aircraft.

Unlike many good moms, Kaufmann turned her boys’ passion into a career that didn’t exist before.

So, two and  half years ago when she moved from Atlanta to South carolina, she emailed three airports to ask if there are playgrounds and restaurants to visit with her boys. Joe Frasher of the Greenville Downtown airport answered.

“We don’t have those things, but we want them!” He said.

One conversation led to another, Lara making more suggestions to make the airport more accessible to the community.  “Why don’t YOU open a restaurant?” he finally asked her.

Kaufmann, a busy mom of two, didn’t want to open a restaurant, but suggested Frasher hire her to FIND someone to open a restaurant. Since that time, Lara has been the Public Relations Director for the Greenville Downtown Airport, a position that didn’t exist before. With her journalism and sales background, she’s been a vocal advocate for the airport in chamber of commerce and other community groups, ensuring that moms, dads and kids (as well as the business community) understand that it’s THEIR airport.

And in September, 2010, the Runway Cafe was opened as a family-friendly place for locals and “passing thru” pilots to share meals and stories with a great view of the runway from the dining room and patios.

Kaufmann is continuing her crusade to bring the airport and community together with a park, playground and amphitheater large enough for school field trips.

There are still good jobs to be had in aviation, and reports of a coming pilot shortage show there are likely to be more of them.  There are also many other highly-skilled careers in aviation for which companies are having difficulty finding qualified applicants. Part of that shortage comes from a lack of access that most of us who grew up before 9/11 don’t consider.

Prior to 9/11,  10,000 school children per year were able to visit the nearby commercial Greenville-Spartanburg International Airport, get tours of the workings of the airport and control tower.   Security concerns and budget cuts have made it nearly impossible for schools and airports to interact.   While smaller groups could go on field trips in the past, schools find that security and budget constraints make it necessary to take fewer trips that involve larger numbers of students.  They need to send a full bus (of about 80 children) to make a field trip cost-effective, and a group of that size is simply unworkable given the security procedures to provide a highly interactive experience at most airports.

The playground and amphitheater project that Kaufmann has spearheaded will provide a venue for a busload of children to interact with aviation professionals while small groups can be conducted around the airport to see aircraft and other equipment safely.

There are four flight schools on the Greenville Downtown Airport, and everyone benefits from having flight training available.  It’s much easier for everyone when flight training occurs with some distance away from the large, busy commercial airlines with heavy airline and freight traffic.

The business community and other professions also benefit from closer association with the local GA airport.

Most of the public doesn’t understand the role that general aviation plays – critical assistance and equipment for local businesses, as well as most medical organ transplants come in and out of small community airports. Kaufmann’s advocacy also extends to assistance with the Southeast Aviation Expo each fall, which features a trade show, static displays, speakers and job fairs that help companies find qualified applicants from the community and helps community members find good jobs in the aviation industry.

What does Kaufmann think of Special Services Corporation?  “They’re the oldest tenant at the airport, and that’s saying something!” she says.  “They’re great guys, they’re incredibly ethical and community minded, and they always go out of their way to do the right thing.”

She notes that SSC lends its hangar for the Southeast Aviation Expo’s speakers and events. “They have one of the nicest hangars on the field, so we’re glad to be able to use it.”  she notes.

Airports sometimes find themselves at odds with their local communities, but with some of the really great community-centered airports like PDK in Atlanta, the community tends to come to the aid of the airport in any dispute.  Kaufmann’s goal is to make that happen in Greenville as well.   “Greenville moms know that this is THEIR airport!”  Kaufmann says.

Anyone with a trivial complaint may think twice before taking on Greenville moms!